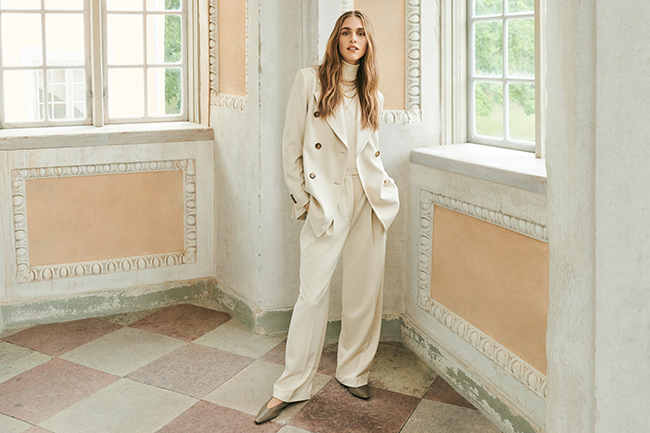 On August 4th Beirut was rocked by a chemical explosion in the Lebanese capital’s port, causing devastation and the tragic loss of life. Beirut is also home to H&M’s latest collaborator, Sandra Mansour, whose romantic designs landed in stores and online today. She told Vogue earlier this month her atelier and showroom were destroyed as well as her home, and about 20% of her archive.

Fellow designer, Zuhair Murad, also lost a significant amount of his archive. Mansour was unharmed as she had been in Geneva, while her family and employees in Beirut were unharmed. Even still, shockwaves and panic must go through someone when they see their home and work destroyed, whether they are present or away. It’s a heartbreaking yet evolving month for Mansour following this tragedy.

Her collaboration with H&M adds her name to a list of the world’s most prominent designers who have, for the last almost 15 years, designed and co-produced pieces with the high street store, such as Lanvin, Jimmy Choo and Moschino.

Typically a November date marks these launches, however a welcome and needed injection of style comes early in 2020 following an unprecedented Spring Summer season where the world of retail has suffered crippling drops in footfall and albeit, profit. But H&M are pioneers of recovery. Affordable pricing, a focus on sustainability (and one of the first mega brands to commit to a charter of ethically produced fashion), has long attracted the discerning shopper. Where else could you buy a Balmain blazer for under €100? Mansour’s collection sees the same price-ethics underpin design, as well as parlaying Mansour’s whimsical aesthetic. “The inspiration for the H&M collaboration was nature and natural elements. Especially the sunflower, which represents the cycle of life, and its dependency on sun and light. Poetry and painters inspired the selection of fabric – the dark laces, jacquards, and embroidered organza. With the Fleur du Soleil collection, I want to talk to women around the world by sending a message of hope, something we really need right now,” says Mansour. Fleur du Soleil, the name of this collection, comes from the designer’s fascination with the way a sunflower follows the sun from day into night. There’s a delicacy to the pieces that masquerades as one of Mansour’s own couture pieces. But that’s what makes H&M a champion. The brilliance of being able to manufacture such collections is something I marvel at.

That premise also extends to the September launch of Giuliva Heritage’s debut of tailoring on the shop floor. Not a household name as such, they are known for their use of exquisite fabrics in the production of mannish suiting in womenswear. Speaking of fabrics, they also use recycled fabrics which lines them up perfectly for a collaboration like this.

Your working from home looks just got a whole lot more formal, thankfully. With a September 3rd launch, H&M’s gravitas for being clever at spotting the next collaborator is to be admired. If they do anything, they introduce the loyal consumer to collections that inspire them and make them feel stylish in a piece that is just a little extra-special.