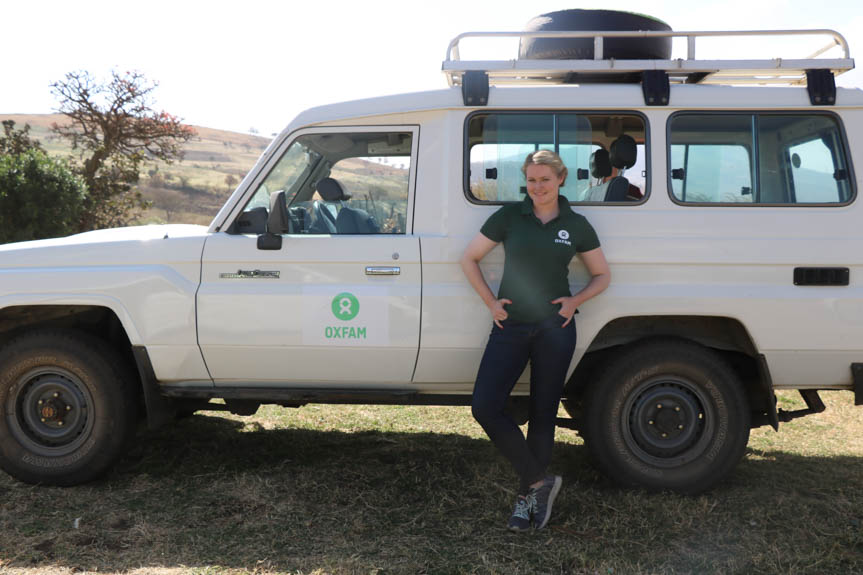 The Female Food Heroes programme, as you might have read from my earlier blog post, supports female food producers around Tanzania, and gives them a chance to not only learn new skills through the programme, but to build new relationships with the other women in participating. It was completely obvious how strong these relationships had become between them during the short period of filming. Day Two gave them a chance to test these. I was joined in my expedition by Oxfam America ambassador, Genevieve Gorder, a presenter and interior designer who was in charge of the womens’ task that day. Using materials provided, the ladies were put into groups to redesign the interior of the houses they had been staying in. The lovely thing about this, is that it was an opportunity for them to give something to the families who had taken care of them over the course of the show. It’s a risky business handing over your home for someone to give it a makeover! Three houses were taken over by our Female Food Heroes and between a coat of paint, some imagination and a lot of love, I was astounded at what they did.

They spent an entire day redecorating, painting, hanging pictures and moving furniture to give these homes some TLC. It was the job of myself, Genevieve and JB to figure out the winners, who each would receive extra votes. Our winner, without a doubt, was what we called “The Polka Dot” house, simply because they had taken advice from Genevieve that instead of painting an entire house, they could mark small thumb prints all over its interior. They took it a step further and did the exterior! It certainly made this little house stand out to a point where another women living in the village asked if they could do it to her house too. It was a lovely experience to see how committed they became to this task. They joined forces, and not once did I hear a squabble or disagreement over how they would decorate it. They worked as a team, in harmony.

In the midst of the painting and decorating, I had a chance to sit down with Betty W Nyange, a food producer and farmer from southern Tanzania. Betty speaks perfect English, much to do with the fact she worked as a soil analyst in a University for Agriculture for several years. At 62, and retired from her position, farming has become her new career, and with the assistance of her husband, they work the land to sell their produce and support their families. Betty was such a character and over the course of the few days, we become good pals, with plenty to talk about every day.

My main learning point from my second day on Female Food Heroes was about commitment. None of the women shied away from embracing a task in which they had little or no experience, but the result was giving a family something special about their home. Between decorative wall hangings, making TV tables and even painting skirting boards, they saw no bounds to this task. Perhaps that’s how they approach their farms too; with no limitations to what they can grow, develop or reap.

Take a look at my photo gallery from Day Two below!

All pics shot on a Canon 750d which was kindly on loan from Canon Ireland! Oh and Ps the video is coming along nicely and you can see what this camera can really do!