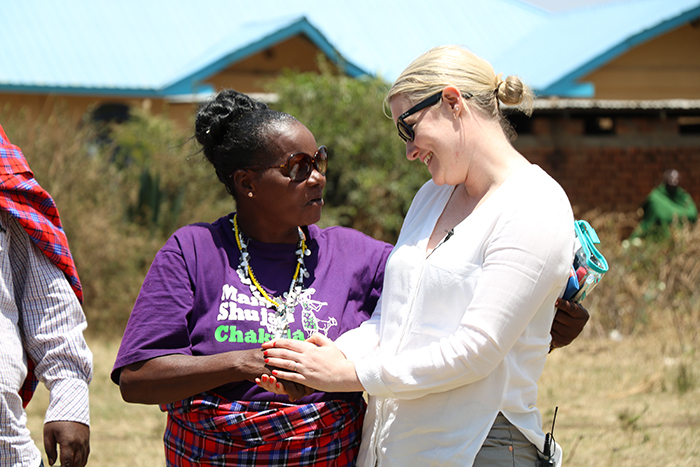 I’ve been on an adventure. An emotional, life changing and enlightening adventure. Female Food Heroes is something you are going to read about a lot here, and in the media a lot more from now (I might have something to do with that). You might have seen on my Instagram and Twitter over the last week that I travelled to Tanzania with Oxfam Ireland to see this wonderful project. But before I get into my experience of this, I need to tell you what it is.

Female Food Heroes or Mama Shujaa Wa Chakula in Swahili, is an Oxfam initiative in Tanzania to give female farmers training and support as food producers. Fifteen women take part in a reality TV show that is filmed over a number of weeks, with each woman taking part in a number of tasks and challenges for each episode. The winner of each task is awarded votes, but the main decider of the winner is a public vote.By actively engaging the public through national television, the show teaches people about the daily challenges the women face as farmers and providers for their families and communities. It also allows them to call on government officials and decision makers to find solutions to these challenges and commit to real change! The programme is hugely popular in Tanzania with millions tuning in every evening. I was lucky enough to be part of this show for the three final episodes last week, with host Jacob Stephen “JB” Mtangazajiut, but my main goal of this journey was to learn from this exceptional women the various challenges they face as female farmers in remote parts of Tanzania, and what they need to make their work more efficient.

Arriving in the filming location of Enguiki village (two hours from the main city of the district, Arusha) I was greeted with affection and a warm welcome not only from the women but from the Maasai community who live there. Every person stopped to shake hands and say “Karibou”, which means welcome in Swahili. I’ve never experienced such an openness from a community of people whose values know no bounds. Filming the first episode was a joyful experience. I was introduced to each of the women and learned just how far they had to come to be part of this show. One thing to note is that Tanzania is a vast country. Some of the women had travelled on buses for several days to arrive at the village.

I couldn’t arrive without something to give the ladies, so I put together small make up bags with treats like mascara, lipstick and nail varnish to give them. The lovely people at Penneys and Coty Ireland donated these and I cannot explain the joy on the ladies’ faces upon opening these. One very funny moment was seeing them all put on the sunglasses I had brought them, talk about co-ordination! I was humbled by how grateful they are at something very small, and things that I take for granted sometimes, so let’s say lesson one has been humility for this spoilt girl.

Then it was time to sit and talk seriously with some of the women, including Anjela Chogsasi Mswete from Iringa andChristina Machumu from Mara, who both own and run medium size farms in South Tanzania. From listening to their stories, one common challenge is logistics. Both women told how delivery of seeds and supplies can often be delayed, and timing is everything when growing crops. If they could change anything, it would be access to the raw materials and products they need to aid growth. Both women not only support their own families, but also care for orphans in their villages; some caring for up to four extra mouths each day, as well as growing crops to sell at markets. These are businesswomen after all.

The winner of the show is given the equivalent of $10,000 which they can use to fund their farms; nearly every women said they would buy a tractor for their villages to use should they win. Not one mentioned anything they would buy for themselves which highlighted to me the differences between their world and the one I live in. Material things are not an option, each penny is reinvested into their farms.

I left day one with a lot of thoughts on how I approach my own life. The “Mamas” all radiate contentment and positivity about their lives even though they have so little. It was a feeling that was contagious to be honest. I couldn’t help but smile and laugh along with them all day, and I am still reflecting on their attitudes to their work and lives. We could learn a lot from them. And I sure did.

You might have noticed some pretty amazing images on my social feeds well that’s thanks to the team at Canon Ireland for lending me the camera of any blogger’s dreams, the 750d. All the pics below were shot on this as well as my video content (oh yeah the video is to come!)

Part two is coming later in the week when I get to meet with Oxfam America ambassador Genevieve Gorder, and we film an interiors and design challenge for the penultimate episode.